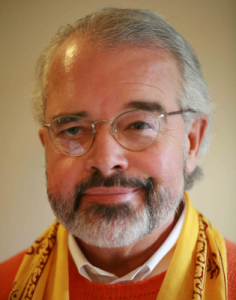 Ramananda (John E. Welshons) is a highly respected contemporary spiritual teacher who lectures and leads meditation courses throughout North America. He has been a practitioner of vipassana (mindfulness) meditation and various forms of yoga for more than forty five years.

He has traveled and studied extensively in India, spending time in the ashrams of Meher Baba and Neem Karoli Baba. He has worked closely with Ram Dass and Stephen Levine, and is the author of three critically-acclaimed books: One Soul, One Love, One Heart; When Prayers Aren't Answered; and Awakening From Grief as well as numerous audio programs on meditation and spirituality

Ramananda has studied world religions throughout his life. He holds a B.A. in Comparative Religions and an M.A. in History of Religions.